Congestive Heart Failure in Dogs: Spironolactone is a Life Saver

(Disclosure: This post contains affiliate links to Chewy.com. We save quite a bit of money by ordering our pet meds through them, whenever possible. If you purchase anything through these links as a new customer, we'll earn a small referral fee at no extra cost to you.)

Our Chihuahua, Pete, was diagnosed with the terminal combination of congestive heart failure and pulmonary hypertension in fall of 2017. Since I was already knee-deep in research about both of these conditions, and as a way to cope, I pitched and eventually wrote articles for Hill’s Pet about both of these conditions. Between my writing and research and managing these conditions in my own dog, I thought I knew everything there was to know about how to treat them -- but it turns out, I’d missed something.

While dogs with congestive heart failure can live for years with this disease if it’s well-managed, typically the prognosis for pets with both of these conditions is a few months at best. When we took our little guy in, he was struggling so badly to breathe that he had to be hospitalized and spent several days enclosed in an oxygen chamber. For my husband and I, who dote on this pup like he’s our furry surrogate son, it was a complete nightmare. We were given a 50-50 chance that he’d survive the weekend, and told that even if he did, he probably had “weeks to months” to live after that.

Thankfully, he did survive that hellish weekend, and we were able to take him home. From then on he was on a cocktail of medications that included the typical CHF treatments Enalapril and Vetmedin, the diuretic furosemide (brand name Lasix) to flush the excess fluid from his heart and lungs, and sildenafil (brand name Viagra, and let me tell you how much fun it’s been for my husband to call in that prescription) for the PH, to improve circulation in his lungs.

I’m extremely happy to tell you that his “weeks to months” prognosis stretched into many months, and then into years. We’re coming up on three years since Pete’s diagnosis, and thankfully, he’s still with us. Not only did the medications and lifestyle changes we made for him add years to his life, but he improved so much in those first months that we were able to discontinue the Lasix before it could start wearing on his kidneys.

Everything was fine, until about a year ago. He’d gone two years without any noticeable breathing problems, but last year he started having the occasional episode of labored breathing. We still had Lasix on hand from before, so under the direction of his vet, we’d administer a brief regimen until he got over the eposide, and then he would be fine. For a while, these episodes were so far apart that we would almost forget they’d even happened before he had another one.

The thing about congestive heart failure, though, is that it’s a progressive disease. The medications can slow it down, but they can’t stop it completely.

This summer, the episodes started becoming more and more frequent, and more and more severe. We started keeping him on Lasix, but it wasn’t helping. We’d increase the dosage, and that would help for a few days, but even as it helped we could hear the fluid rapidly building back up in his chest. His vet gently and lovingly advised us to do what we could to keep him comfortable and prepare to say goodbye.

One of my coping mechanisms when faced with something like this is to do research. I wanted to know what to expect when the end came for our baby boy. By the grace of God, I came across an article on the end stages of congestive heart failure in dogs that mentioned spironolactone, another type of diuretic drug that works on the kidneys in a different area than Lasix, and can sometimes compensate when Lasix begins to lose its effectiveness -- which was exactly what was happening with our little pup.

We immediately asked Pete’s vet about it, whose opinion was, basically: can’t hurt, might help. So she called in a prescription and we added it to his regimen ASAP.

It’s been about a month now, and so far, so good. Other than some mild bouts of wheezing here and there, Pete’s been breathing easy and back to enjoying life.

I’m not under any illusions that this is a cure, or even a long-lasting solution. But for now, spironolactone for congestive heart failure in dogs has saved our little guy’s life, and given us more time to enjoy our best little buddy. I’m sharing this so that if you’re in the same boat we were in a month ago, you’ll know that there’s one more thing you can try before giving up on your fur-kid. Believe me, even if it only gives them “weeks to months” of extended life, the extra time with them is worth it. 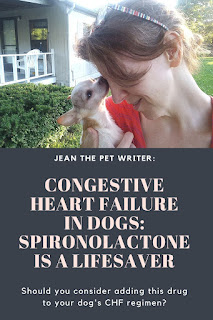 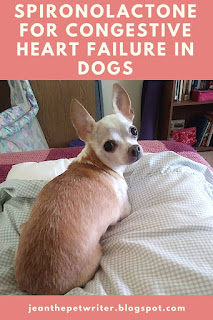 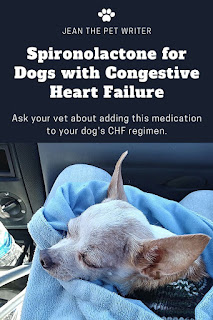